Discussion forum for UK puzzlers. The UKPA is the UK representative of the World Puzzle Federation.

The current sequence of the first 10:

The new order of the first 10: The May optimization - Shopping Mall

Hi. I took part in one of these some time ago. I seem to remember there was a high score table somewhere.
Can you let me know where that is please (if it exists), and how to submit an answer for the optimiser?

PuzzleScot wrote:Hi. I took part in one of these some time ago. I seem to remember there was a high score table somewhere.
Can you let me know where that is please (if it exists), and how to submit an answer for the optimiser?

As suggested by our friend Zafer, this puzzle is in tribute to Georg Filser, the author of numerous great optimizations on LMD web site, devotee and master of filomino, who passed away this July. On 21th of july I've learned that Georg Filser (aka geophil) had passed away from the
site Logic Masters Deutschland e.V. We haven't met personally but we have wrote each other
via Logic Masters forum site. I felt very sad when I've heard his passing

Then towards the end of
july I told Jovan my idea about an optimizer dedicated to Georg and now here it is. I want to thank
Jovan realizing such an idea very quickly. There were some nominees for the puzzle type and fillomino
was one of them. In june 2007 there was a fillomino optimizer published on LM site. Bernhard Seckinger
(aka Berni) mentioned that the idea for that optimizer and also the puzzle itself came from Georg.
So I think this one fits good here. I hope that there will be more puzzlers dealing with this nice task
till deadline which is on 18th of september. I know there exists lots of optimization addict good puzzlers.
I hope that they want to give a try in this one to honour Georg. Rest in peace Georg..

If you don't normally try optimizing, this is a good one to start with.
The rules are simple: Fit a fillomino solution into the mostly-empty grid, using digits 1-9.

Your score is the sum of all digits used, so using big numbers is good.
But also for every row and column: if there are x different digits in that row/column then you add x^2 points to your score. So using a variety of numbers is good.
There is an Excel sheet that calculates the score for you. See example of a solution here.
I haven't spent much time on it, it's not obvious what approach gives the best scores...
Top

The December optimization - It's time for a Christmas tree 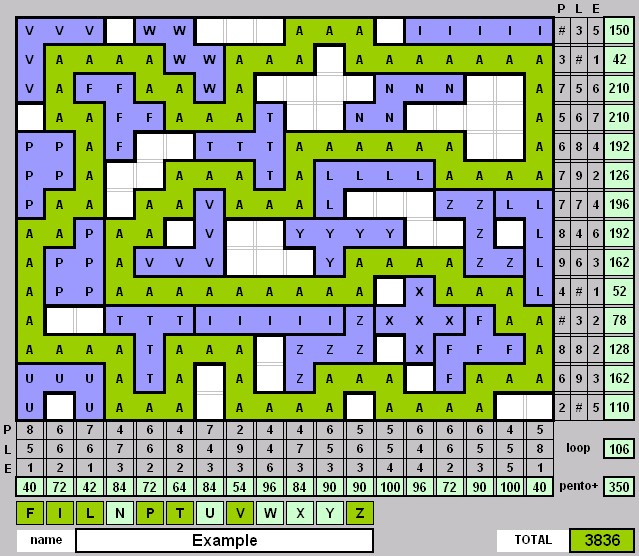